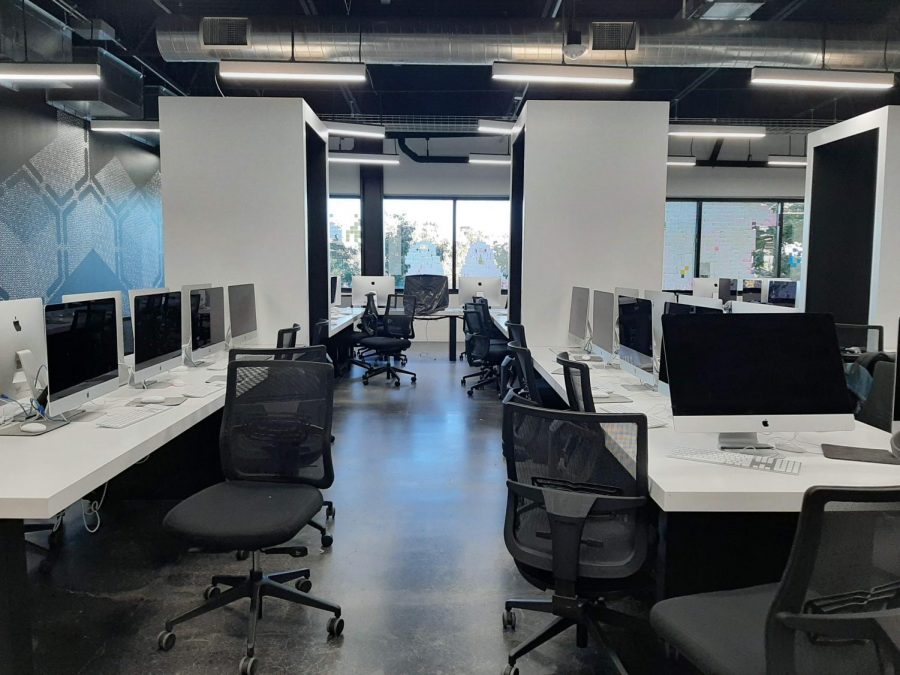 Instead of classrooms, 42 Silicon Valley has a computer lab that's open 24/7.

In 2017, Igor Lucic was working as a used car salesman in Ohio, but he wanted to do something more with his life. He found his answer when he saw an ad for 42 Silicon Valley, a free software engineering school in California. 42 Silicon Valley doesn’t have teachers, classes or books, but instead offers a self-paced curriculum where students learn by completing projects.

Lucic had attended a vocational high school and worked as a test engineer before taking over his family’sused car dealership. He wanted to be a software engineer, but he had known since middle school that he didn’t want to attend a traditional four-year college.

He had heard that a degree was not necessary to be a programmer, and the high cost of college was another deterrent.

“I remember my sister really struggled every year to get scholarships,” Lucic said. “You can’t even just focus on your studies. You have to focus on how to get the money for studying.”

So when Lucic saw that 42 Silicon Valley offered free education and free dorms, he thought he’d found the school of his dreams.

Xavier Niel, a French billionaire, founded 42 in 2013 in Paris. It was named for the ‘Answer to the Ultimate Question of Life’ in The Hitchhiker’s Guide to the Galaxy. According to a report on NPR news, Niel’s goal was to reduce the shortage of software developers in France and to give opportunities to students who didn’t succeed in France’s mainstream education system. His sister campus, 42 Silicon Valley, opened in Fremont, CA in 2016.

Many free resources to learn coding already exist online, but 42 differentiates itself by providing free dorms and a computer lab that’s open 24/7.

Providing a space for students to learn together is key, according to 42’s Chief Academic Officer, Gaetan Juvin. He said that online courses don’t work because the students don’t have motivation. When the students work together, they motivate each other.

Unlike a traditional college, 42 doesn’t base admissions on applicants’ grades or SAT scores. You don’t even have to graduate high school to apply to 42.

The only requirements are that you are 18 or older and that you complete a month-long training program called the Piscine, available to anyone. Originally, there was an online test that you had to pass first, but the test has been removed.

The idea is that in a swimming pool you either sink or swim. There’s no teacher to listen to or books to read. All students get is a project assignment. They have one day to complete the assignment, with only the internet and their peers for guidance.

Students have to work hard during the Piscine. Elijah Hampton, another student at 42 Silicon Valley, said he worked 10-16 hours a day for the entire month.

Not everyone can handle the intense schedule and lack of structure. According to Juvin, around 30% of applicants drop out before the end of the Piscine.

Between 60-80% of applicants who complete the Piscine are then accepted into 42 as cadets. Admission is based on how well applicants perform on projects and exams. Preference is given to those who spend more time in the lab, to ensure that admission is given to students who deserve it, rather than students who already know how to program.

If a student is not accepted after their first Piscine, they can always try again.

It doesn’t get any easier once you’re a cadet.

Students no longer have to complete a project every day, but the projects get harder and require more planning and self-motivation. Hampton said some projects can take up to four months to complete.

Students say that the environment is highly collaborative, and that the only people who don’t succeed at 42 are those who are afraid to ask for help. In order to enforce collaboration, there’s a peer-to-peer grading system. In order to have your project graded, you have to help other students or grade their projects.

While 42 doesn’t have name recognition, and doesn’t award an official degree, some of its students have successfully transitioned to a full-time job.

Juvin said that companies are impressed by the abilities of 42’s students. For example, Ford came to 42 to hold a hackathon, intending to pick one student for an internship, but they came away with four.

Despite these success stories, it’s hard to compare 42 with other methods for learning programming, because the company doesn’t track the percentage of its students who land full-time software engineering jobs.

Officially, graduation from 42 is at level 21, but many students leave earlier. Levin Weinstein was in 42 Silicon Valley’s first cadet cohort in 2016. After reaching level 7,  Levin unlocked the internship project. He got an internship at Samsung Electronics America.

Afterwards, he accepted a full-time job at a startup instead of returning to 42 full time. He said the graduation certificate is a nice incentive, but the main goal is to get a job as a software engineer.

Even if you’re not a full-time student at 42 anymore, you can still come back to work on projects. Levin finds it useful to come back to learn new concepts.

“A lot of the higher-level projects teach you things that you couldn’t really learn elsewhere,” Levin said. “A lot of the pedagogy has been written by people who literally took over the internet in France.”

Igor Lucic moved from Ohio to California in January 2018 to enroll in 42. It was a difficult transition for

him because of the 42’s alternative teaching style.

He will never forget his first project.

“We had to replicate the standard C library, and it never explained why you’re doing it, what’s going on or how to start.” Lucic said. “That’s exactly how the school operates, and that was really tough to get over because I’ve never been taught like that.”

At first it was intimidating to have so little guidance, but Lucic was surprised to realize how much he could accomplish with just perseverance and help from his classmates.

“Eventually,” he said. “I was just able to buckle down and realize that I got this.”