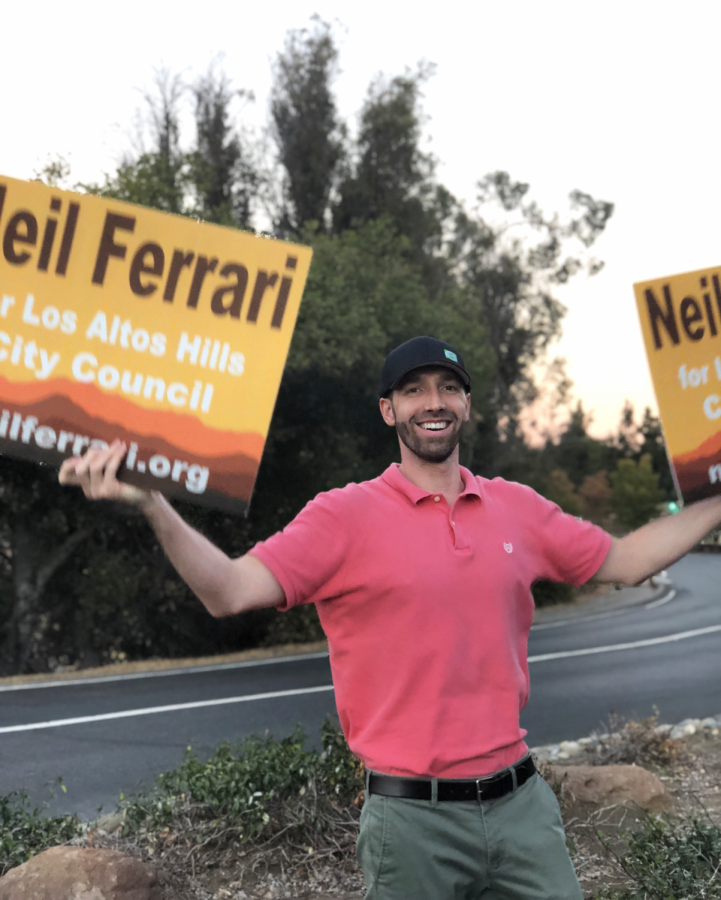 “As long as you stay 100 feet away from the polling areas you can demonstrate. So I’m using my rights right now. I checked with the town to make sure I was doing everything legally,” Ferrari said.

While he answered interview questions in the middle of a busy three-way intersection, the candidate dropped his campaign posters to run to a car slowing down at a green light. With only a slice of pavement separating him from oncoming traffic, Ferrari conversed with a potential constituent about local measures before his voice was drowned out by passing vehicles.

The 32-year-old said he received mostly good responses, with only two thumbs down and one “boo” while campaigning to motorists on election day.

Ferrari has taken classes at Foothill College. “I love continually learning…two quarters ago I took electronic music production one, and, after that, I took cardio kickboxing,” he said.

When asked about his policy initiatives to support local community colleges, he expressed support for tuition aid for low income students but did not find free or subsidized college feasible.

The candidate said his platform prioritizes resident safety by minimizing fire danger through the maintenance of shrubbery. He plans to increase police presence to avoid burglaries and supports local sustainability measures. When asked about his stance on climate change, Ferrari detailed his desire to transform Los Altos Hills into a town fueled by 100 percent renewable energy through an increased reliance on wind and solar power.

At Foothill, he expressed support for installing electric vehicle chargers.

Though Ferrari has goals to enact change on a city level, his passion lies in national politics.

“My ultimate goal is to start on the local level and work up to higher levels and positions in the government,” he said.

As he wrapped up his fourth and final hour campaigning in rush-hour traffic, Ferrari spoke of his long-term motivation.

“I want to make the world a better place where everyone lives in peace and harmony.”