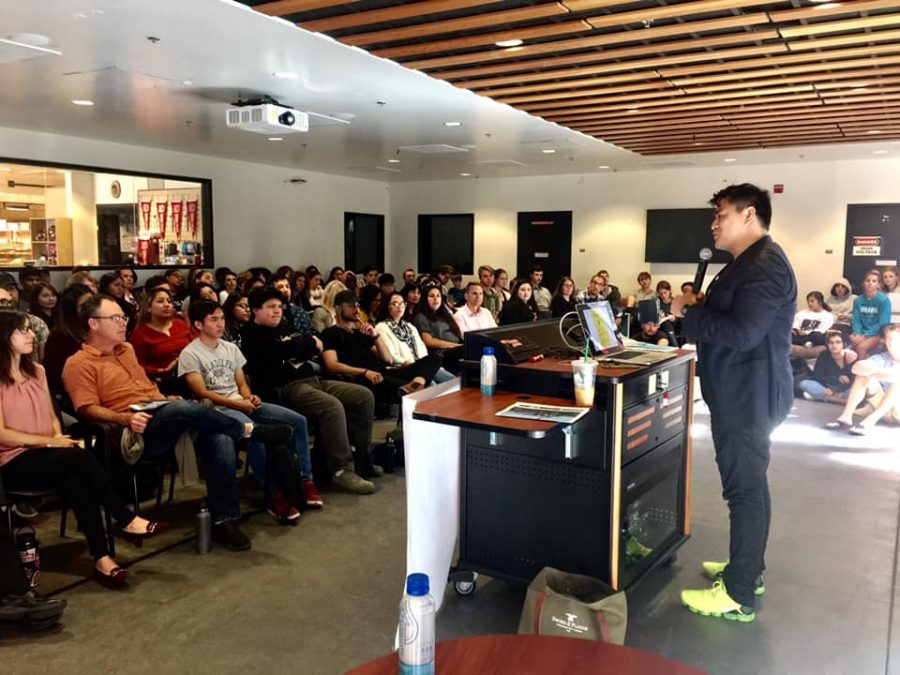 Jose Antonio Vargas delivers a lecture during the Immigration Teach - In at Foothill College.

Samina Ali, a Muslim American author and activist, championed this initiative during her lecture. With her Ted Talk titled “What Does the Quran Say about a Muslim Woman’s Hijab”, a video with over three million views, Ali became an international spokesperson for women’s rights, and especially those of Muslim immigrants. Since the talk, she has established an online platform called Muslima — a collection of artistic videos that exist to take apart narratives imposed on Muslim women.

“I’m including voices we don’t normally think of. When we think of Muslim women, we think she’s Arab and frail and dependent on men. I’m going against that narrative,” she said.

According to Ali, the media has had a large role in solidifying misjudgements towards the Muslim American community. “91 percent of media reports negatively on Muslims,” said Ali, speaking on the common association of Muslims with terrorism. She highlighted the prevalence of the perception, and the worldwide consequences it has resulted in: most recently, both France and the U.K. have instituted restrictions against hijabs.

As Ali focused on the stereotypes Muslim Americans face, Pulitzer Prize winning journalist Jose Antonio Vargas challenged how the issue of immigration is viewed as a whole.

According to Vargas, there were 11 million undocumented immigrants in the U.S. in 2015. And though most Americans may imagine immigrants as refugees crossing the Mexican border, they may no longer be the majority of undocumented people.

“The fastest growing immigration population is Asian, not Hispanic,” said Vargas. “And we don’t talk about undocumented black people.”

The speaker’s own story is one that doesn’t fit into the stereotypical mold.  He was born and raised in the Philippines and moved to the U.S. when he was 12 years old. He didn’t know he was undocumented until he applied for a driver license — it appeared that the green card he showed to the DMV was fake. During his lifetime, he had to lie multiple times in order to avoid deportation.

Like Ali, Vargas utilized his skill in communication and journalism to tell his story and chip away at misconceptions. After reporting on multiple high profile pieces, Vargas revealed his undocumented status in an essay to The New York Times, and he has fought for immigrant rights ever since. He released documentaries about race relations, like “White People,” and has written a book about his own journey, titled “Dear America: Notes of the Undocumented Citizen.”

The speakers were met with loud applause from the audience. The event was held in hopes that students would gain a greater understanding of immigration in America from a diverse panel of professionals.

President Thuy Nguyen, inspired by the stories told during the teach-in, concluded with her own. She told students about her family, all refugees from Vietnam, traveling to the U.S. by boat. She spoke in the hopes that Foothill will serve as a welcoming campus for all communities, just as diverse as the professionals leading the event.