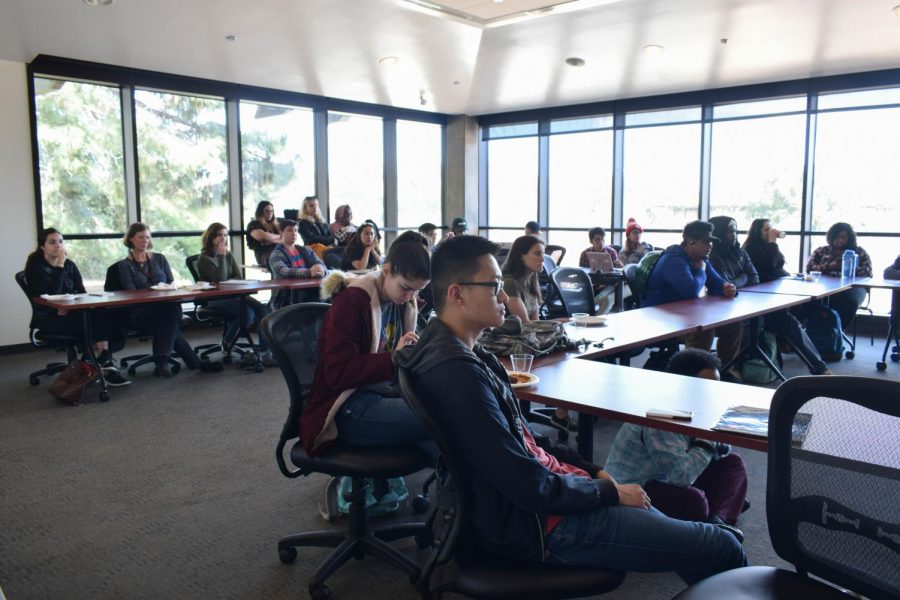 Foothill College students and faculty lined up outside Appreciation Hall on May 14 to watch an exclusive screening of “Fail State,” a documentary directed by Foothill alumnus Alex Shebanow and produced by news legend Dan Rather. The film exposes the predatory practices of for-profit colleges in relation to the government’s historical disinvestment in the public college system.

The documentary details the story of six students who were misled into enrolling in for-profit colleges with hopes of gaining vocational skills and degrees that qualified them for jobs in their respective fields. They were all shocked to learn that these institutions, which they had paid thousands of dollars for, were full of bogus courses that didn’t teach anything substantial and offered degrees that weren’t recognized by employers or other colleges for transfer. Troubling marketing techniques used by for-profit colleges to lure in unwitting students were also revealed to be common practices.

In a particularly disturbing scene, a method known as the “pain funnel” was exposed, in which for-profit recruiters are instructed to probe potential students for sources of pain or fear in their lives and convince them that enrolling would alleviate those problems. This clip, alongside the exhaustive coverage of other injurious methods used by the for-profits, evoked widespread gasps of disgust and disbelief from the audience.

“Fail State” not only examines corruption in today’s higher education but also elucidates the events that led to it. Through interviews with various professionals — including college administration heads, congressmen, and investigative reporters — it explains the positive shift in the affordability and attendance of public colleges post World War II, as well as the ballooning tuitions costs which followed. Graphics and charts effectively illustrated these points, as well as clips and pictures from historical congressional hearings that impacted the state of higher education. The creative use of these tools painted a coherent picture of how the United States higher education system has changed over time and what major events contributed to it.

The film also also warns of the dangers higher education faces today, describing the worrying tendency of the federal administration to favor private schools over public schools. It details some of the federal administration’s plans to cut funding for public higher education, as well as its efforts to deconstruct Obama-era regulations that cracked down on the for-profit college abuses.

In an interview after the panel, Kanter described the mission of College Promise. The program works to ensure that “every student who wants the opportunity to get an education beyond high school has that opportunity.” She listed multiple incentives and necessities for college students, including  “scholarships, having childcare available, [and] having food available.”

In agreement with the College Promise director, Shebanow explained how public colleges need more money to be able to provide these incentives. He outlined that with more funding, public colleges could “offer more classes, different programs, lower student to teacher ratios, and more.”

His words couldn’t be more relevant for the local community. The FHDA district is currently undergoing a budget crisis, which has resulted in multiple class cancellations that have been sorely felt by students, and may result in further cuts to student services. The budget crisis stems from lowering enrollment, which historically decreases at community colleges as the economy improves.

Shebanow reflected upon the declining enrollment at community colleges and pointed out that to many people, especially those with a lower socioeconomic status, “the opportunity cost of going to school can sometimes be crazy. Every hour that you spend in a classroom is one hour you could be working.” Nevertheless, he stressed the importance of “convincing people that college is worth it long term.”

The film’s director also commented on how students can make their voices heard in regards to higher education policy, an issue that affects them more than anyone. While he approves of student protests and activism on campus in response to things such as tuition increases and class cancellations, he urges students to “take that energy and focus on Sacramento… it’s not your college president at your community college that’s dictating a lot of the macro level decisions that are happening; it’s happening in Sacramento.”

This sentiment is synonymous with that of one of the final scenes of the film, which urged viewers to submit comments to the department of education. Shebanow drove home the message, stating that, “we have to get state lawmakers to realize the supreme benefits of investing in the education system and what that does for a state.”

“Fail State” will continue to be screened at private events and film festivals across the country. It will be released to the public later in 2018.