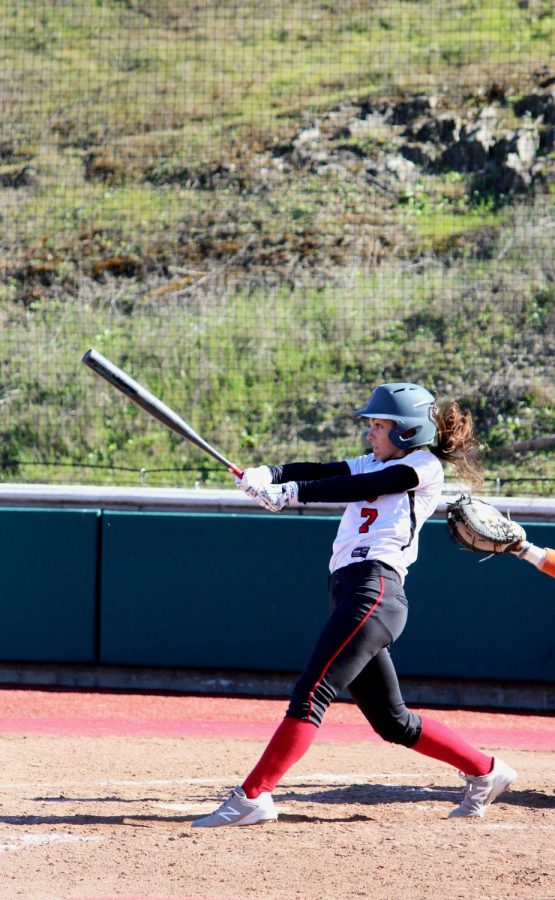 Tiana Bolin follows through a hard swing while at bat.

The Foothill Owls softball team will travel to Ohlone College on Thursday for a 3:00 p.m. matchup against the Renegades.With the Owls sitting at 5-5 on the road, this match is particularly important, because a win would keep them over .500.

As the Owls slipped to .500 after back-to-back losses against the San Jose City College Jaguars and the College of San Mateo Bulldogs — which also brought them to a 12-15 record — everyone wondered if their offense would ever pick up. The more salient question is how long they would take to overcome their offensive struggles.

The Owl’s hitting percentage has been a major problem for the majority of the season, with inefficient offensive numbers. If the Owls can pull together their inconsistent offense, however, they can close strong to end the season. With only a week left in the season, the two most important stats to track are the base percentage and slugging percentage.

The Owls are only hitting .324 and .307, which are 72nd and 73rd respectively across 80 California Community Colleges. These low numbers are problematic. Not only are the Owls failing to score hits in general, they are failing to draw walks and hit-by-pitches.

Other major categories that stand out are their runs, hits, doubles, triples, home runs, runs batted in, extra base hits, total bases, walks, and hit by pitches, all in which the Owls fail to rank higher than 67th. The Owl’s are failing to square up with the ball and drive it into the gaps for hits, extra base hits, and runs, which keeps their stats ranked low, when compared to other colleges.

Granted, playing on the road is tough — especially when you have to play a majority of games on the road in clusters, or if you are forced to play from a score deficit. But a team that leads the game can do much more when it gets runners on base. It can sacrifice, steal, or even hit-and-run.

But when the score is down at 2-0, it forces the team manager to be more mindful not to run into outs or give any away. A team with a lead can set the pace of the game more consistently and force the other team to play by their rules.

Teams that lack athleticism when compared other teams also need to compensate offensively in one of two ways: perfect execution or home runs. The former and the latter have been missing completely for the Owls, which is surprising considering their 12-15 record.

It all starts with the offense. If Foothill College can generate some points, the rest of the pieces will fall into place. Even a small lead takes pressure off of the rest of the team, which can allow them to perform even better. With seven of their eight games coming on the road, the Owls need their offense to find a way to replicate their home game stats while playing on the road.