Perspective: Oprah 2020 — a leader for our nation? 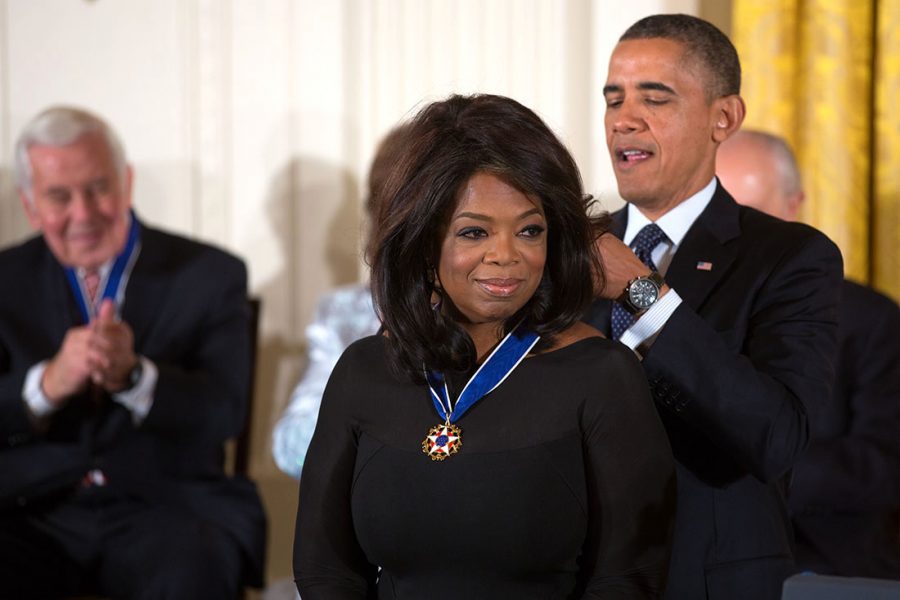 President Barack Obama awards the 2013 Presidential Medal of Freedom to Oprah Winfrey during a ceremony in the East Room of the White House, Nov. 20, 2013.

At the 2017 Golden Globe Awards, Oprah Winfrey received the Cecil B. DeMille Award for outstanding contributions to the world of entertainment. Oprah gave a televised speech that inspired a viral movement, #Oprah2020, urging the philanthropist to run for office in the next election.

Oprah Winfrey has her own empire — comprised of media, movies, television, humanitarianism, and charitable efforts — that she has built from the ground up. Her ability to succeed in spite of those who would have preferred her complacency is an inspiring story of perseverance, a quintessential American story, one that gives us hope. Not only that, Oprah has been a politician’s secret weapon for the past few election seasons — an endorsement from Oprah sends a clear message to her base about the candidate in question. This was clear in both 2008 and 2012, when Obama invited Oprah on the campaign trail to speak with supporters and boost excitement. That same year (2006), Winfrey was considered one of the most admired women in America, second only to Hillary Clinton, who Oprah would also voice support for in 2016.

When Oprah raises her voice, she inspires, and exudes the motivating “charisma” one associates with some of the most personable leaders of the last century — as was seen in her Golden Globes speech this past month, or as far back as her famous “you get a car!” moment in 2004, when her entire studio audience was gifted a brand new Pontiac G6 Sedan. When she spoke at Stanford and coined the phrase “align your personality with your purpose” to inspire business students and recent graduates. Oprah’s openness and willingness to consider different viewpoints could usher in a new era of bipartisanship that seems impossible from where the country stands today. An Oprah presidency could promote an America that looks past the limitations of our two party system and toward working together.

However, if we are going to consider another celebrity for president, we need to give them treatment on par with that of any candidate, regardless of whether that candidate is a career politician. We need to know Oprah’s views, and we need to know that she is experienced enough not just to lead, but to lead effectively. There are many tests a career politician endures before representing the United States on the world stage, and it seems Oprah may have have passed a few; she is grounded, she cares for others, and uses her platform to support causes that are not only close to her heart, but leave an impression on others. According to Forbes, by 2012 Oprah had personally invested $400 million in different educational causes, not including $40 million she personally invested in the “Oprah Winfrey Leadership Academy” of South Africa — just one of her many philanthropic pursuits. She speaks with the conviction I associate with governance, and I have no doubt that she has picked up quite a few leadership skills through operating her “own” company (pun intended).

Nevertheless, while Oprah has worked her way up to her current position of esteem and power, it is not in the same capacity as those with a background in law or civil service. Oprah worked, and certainly crafted an incredible career in media, business, and television — but not politics. She hasn’t attended law school, served in local government, crafted legislation, run for office, worked on Capitol Hill, or dealt with Senators from both sides of the aisle. She isn’t the person writing tax reform, or negotiating health care coverage for millions. Her public position is one that involves less criticism and crisis than that of most public servants.

Furthermore, the Trump Administration has proven that running a business is not the same as running a country. The latter task also consists of understanding the complexities of intercultural communication, crafting legislation, and making life or death decisions in the Situation Room that affect thousands of lives on a regular basis. Not only is the job high risk, it is furthermore a balancing act between promoting your personal beliefs and addressing the bigger picture. It is a role that invites extreme public criticism — Oprah’s current occupation, while public, does so to a much lesser degree.

None of this discounts that Oprah is so revered and respected in our world today. Oprah is loved because she doesn’t have to make those life or death decisions, but does provide insightful commentary that pushes us to think more critically — precisely what is expected from an artist, creator, or innovator. In her current position, Oprah is invaluable in our culture — but making the decisions of a public servant and examining them are two entirely different beasts, incomparable by nature.

Most crucially, we must be critical in examining the possible pitfalls and triumphs of two sequential, radically different administrations run by political outsiders; while a PBS NewsHour Survey shows Oprah winning on the democratic ticket against President Trump, one should not pass judgment on a future candidate solely relatively to their predecessor. Ultimately, we must take our role as voters as critically as candidates take their role as leaders. Only time will tell who will lead the Democratic ticket in 2020, but 2016 should teach us to take our unique system more seriously.