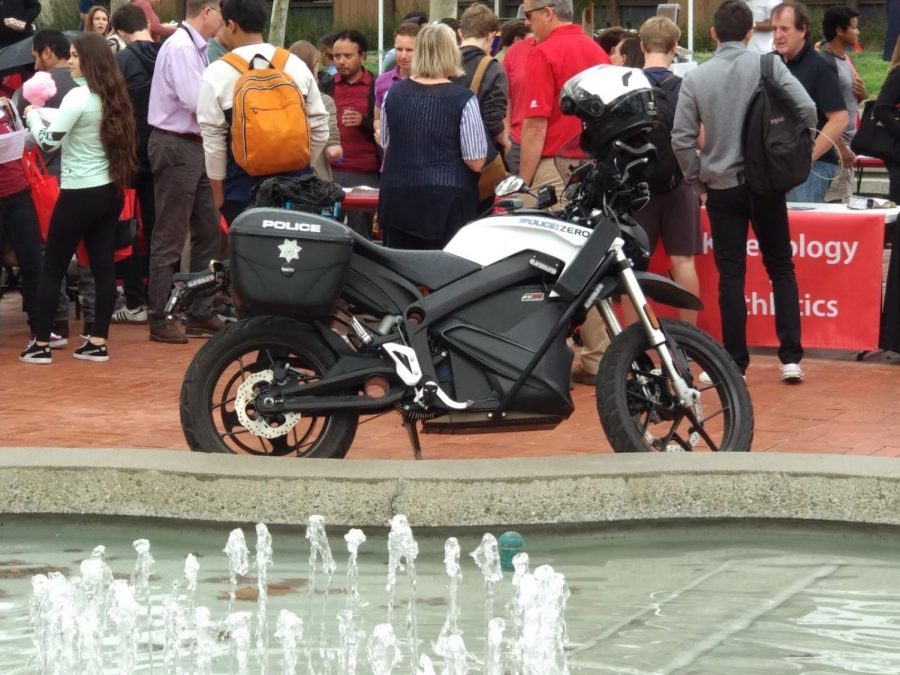 You may have seen Foothill’s mobile police units around campus, either on patrol or helping students and faculty with things like door locks and security. What you may not have noticed is the department’s choice of electric motorcycles. Looking to simultaneously reduce emissions and improve operating efficiency, with the safety and comfort of Foothill students in mind, the  Foothill-De Anza Police Department acquired two Zero Dual-Sport model electric motorcycles in 2014. These motorcycles allow officers to work on campus efficiently without disturbing classes.

Electric motorcycles, not to be confused with electric bicycles, are motorcycles that use a battery-powered electric motor rather than a combustion engine. Since they burn no fuel, they produce no exhaust. This allows them to emit less noise and atmospheric pollution than a standard motorcycle.

To the general public, electric motorcycles have the potential to be the future of urban personal transport. New models from manufacturers combine the benefits of motorcycles and electric cars to create a vehicle that not only reduces emissions, but is cost-effective and reduces congestion in urban and suburban environments as well.

Car buyers motivated by lower fuel costs and tax rebates choose electric vehicles because of benefits such as carpool lane access and reduced environmental impact. The state of California motivates buyers through a rebate on the purchase of a reduced emission vehicle and a sticker that allows said vehicles access to the carpool lane, regardless of passenger count, a huge boon for commuters.

With California gas prices on the rise, and many workplaces now offering electric vehicle charging stations, some car buyers have moved to hybrids and electric vehicles as a cheaper alternative to gas guzzling cars that use traditional combustion engines. For the Foothill police department, the use of electric motorcycles has already saved costs in comparison to a conventional combustion motorcycle — as electric motorcycles require just four cents of electricity per mile.

The direct environmental benefits of electric motorcycles are twofold: reduced emissions and the prevention of chemical pollution. Zero claims that electric plug-in motorcycles reduce carbon emissions by up to 90% compared to gas-burning machines. With only one moving part, electric motors do not require motor oil or engine coolant — both of which are toxic. In the event of a spill, engine coolant can contaminate water tables and is poisonous to animals and humans. Motor oil is a known carcinogen and mutagen which is why dumping motor oil is illegal; oil must be properly recycled in the state of California. Both of these environmental threats are eliminated for electric motorcycles.

Another notable difference between electric motorcycles and conventional combustion motorcycles is reduced noise pollution. Without exhaust to expel, electric bikes produce no exhaust noise. The reduced noise levels of electric bikes allow Foothill Officers to operate on campus during class times without disturbing quiet classrooms, and without compromising equipment performance. While not as direct of an environmental impact as carbon emissions, noise emissions have an adverse effect on human psychological and physical health according to the Environmental Protection Agency.

Unique to the motorcycles as electric vehicles are the benefits that come of their small size. Motorcycle use reduces congestion and provides more options for parking and storage. According to a study conducted by Belgian Consultancy Transport & Mobility Leuven, if just ten percent of car drivers rode motorcycles instead, urban streets could see forty percent less congestion. Reduced congestion means reduced vehicle operation time per journey which, in turn, means less wasted energy during transportation.

Los Angeles has a large problem with available parking for personal vehicles. Moving to motorcycle-based transport reduces the space needed to park a vehicle per individual, alleviating some pressure of finding parking in dense urban spaces.

In spite of the variety of benefits, there are still many difficulties with the widespread adoption of electric motorcycles. For motorcycle riders, the biggest deal breakers are buy-in cost and enjoyment. Although Zero’s DS has been compared to the Tesla Model 3, the price of a brand-new electric motorcycle is still higher than a comparable combustion motorcycle. Current battery technology offers limited operation range and charging times of, at fastest, up to an hour. Many riders are simply not willing to pay a premium for technology that is still in development. The lack of an exhaust port and gearbox is another nostalgic drawback of electric motorcycles.

Foothill campus police serve as a great example of how a relatively small agency can make an impact on the growing problem of climate change. The choice of moving towards electric operations makes the FHDA PD a leader within the community in the efforts to combat climate change. FHDA PD have proved that a community can be environmentally conscious without sacrificing performance — and that being eco-friendly in fact saves costs in the long run.