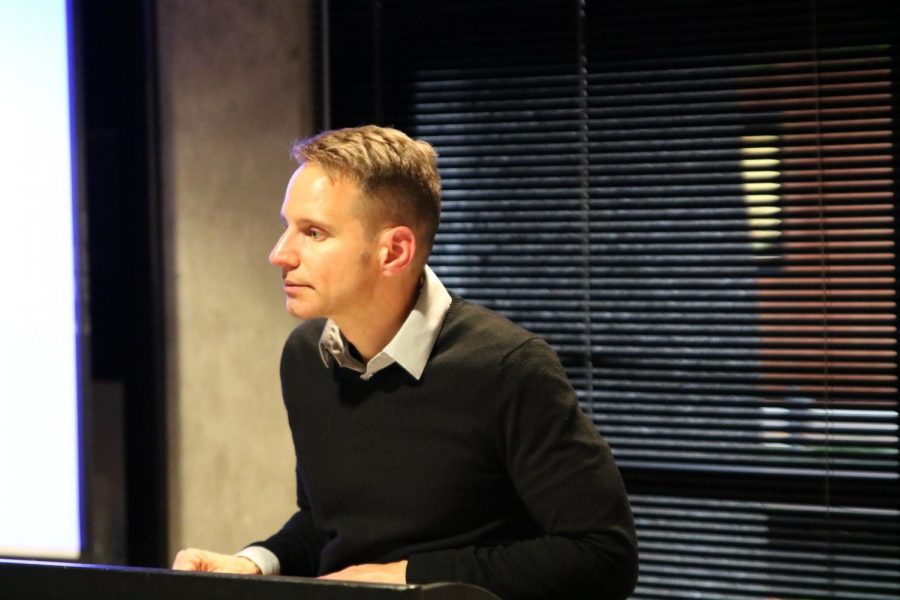 “There is a new revolution in Cuba, but it is an artistic one,” said Professor Ron Herman, chair of photography at Foothill College. On November 16th, Herman gave a talk about the Cuban Artistic Revolution at the Hearthside Lounge, bringing students on a visual journey to Cuba with photographs taken by Herman himself, Foothill photography students, and Cubans both amateur and professional.

As part of International Education Week, Herman shared not only his expertise in photography, but also his knowledge of interconnections between the US and its regional neighbor, Cuba.

Herman offered the following statement on his trips to Cuba:

“Since 2010, Herman has been taking art enthusiasts to Cuba to engage in activities that bring artists from both countries together to share ideas. Upon their return, participants have mounted joint exhibitions of Cuban and American work. These exhibitions are just one link in the chain that connects American and Cuban photographers, and Herman hopes to see more creative collaborations in the future.”

The culture and politics of “the western hemisphere’s first Communist state” is shrouded in mystery to many Americans due to historical travel bans and the US-Cuba trade embargo. Even now, conditions between United States and Cuba remain unstable with a recent warning against Americans travelling to Cuba.

Fortunately, according to Professor Herman, the annual Cuba trips will not end due to American administrative policies — it is still legal for Americans to travel to Cuba on group people-to-people tours.

Along with restrictions on travels, legal trade between the geographic neighbors had been limited since President John F. Kennedy made the Cuban Embargo official in 1962. While this meant the supplies of goods experienced a shortage, it “pushed human ingenuity to solve the problems,” Herman said. As Cuban life continued, common problems were often solved with artistic creativity.

Having experienced life in Cuba, Ron Herman captures the moments on film and brings them across borders to share the images on the Foothill campus.

Herman has fostered cultural connections by organizing numerous collaborative art galleries on Foothill grounds featuring Foothill students and Cuban artists; such as Cuba from Inside and Out in 2010, Cuba in Focus in 2011, Ciudad Fragmentada in 2012, Korda Morda in 2013, Cuban Evolution in 2014, and Raúl Cañibano in 2015. In attendance were distinguished guests such as Jose Manuel Fors, a pioneer of Cuban contemporary art, and Diana Dîaz López, daughter of Alberto Korda, the man responsible for Che Guevara’s famous portrait.

In an interview, Professor Herman expressed that the next trip will focus on El Oriente, the eastern side of Cuba, where few Americans ever get a chance to travel. This itinerary was specially designed to give students “…endless opportunities to discover and experience an unexplored Cuba…”  .

In El Oriente, Santiago de Cuba is the location where locals move to the beat of the city drums — the birthplace of almost all music on the island. The photography excursions to Santiago de Cuba will highlight the “Afro-Cuban origins, religion, music and dance [that] dominate this region…” as Professor Herman shares on eastern Cuba. Eastern Cuba is considered the birthplace of the Cuban revolution led by Fidel Castro, “steeped in history, but also rich has a natural biosphere, the world’s most colorful snails (polymitas), beautiful beaches, and let’s not forget chocolate, since it is the center of Cuba’s chocolate industry.”

The trip will end in Havana with a 4-night stay to enjoy the artistic vibrancy of the capital city.

“The relationships I have developed over the years will allow students to go beyond the traditional tourist destinations, and into the homes and studios of Cuba’s leading artists,” Herman explained.

Furthermore, according to Herman, students can experience Havana in the local perspective by participating in guided photo walks by a Cuban photographer — touring the vibrant streets of Havana, local markets and the emerging free enterprise in Cuba by eating at restaurants, also referred to as paladares. It would also give students a chance to experience the Procession de San Lázaro in El Rincón, considered to be one of Cuba’s most important religious pilgrimages.

Ron Herman is teaching Photography of Multicultural America next quarter both online and in person, and students interested in future Cuba trips can contact him at [email protected]